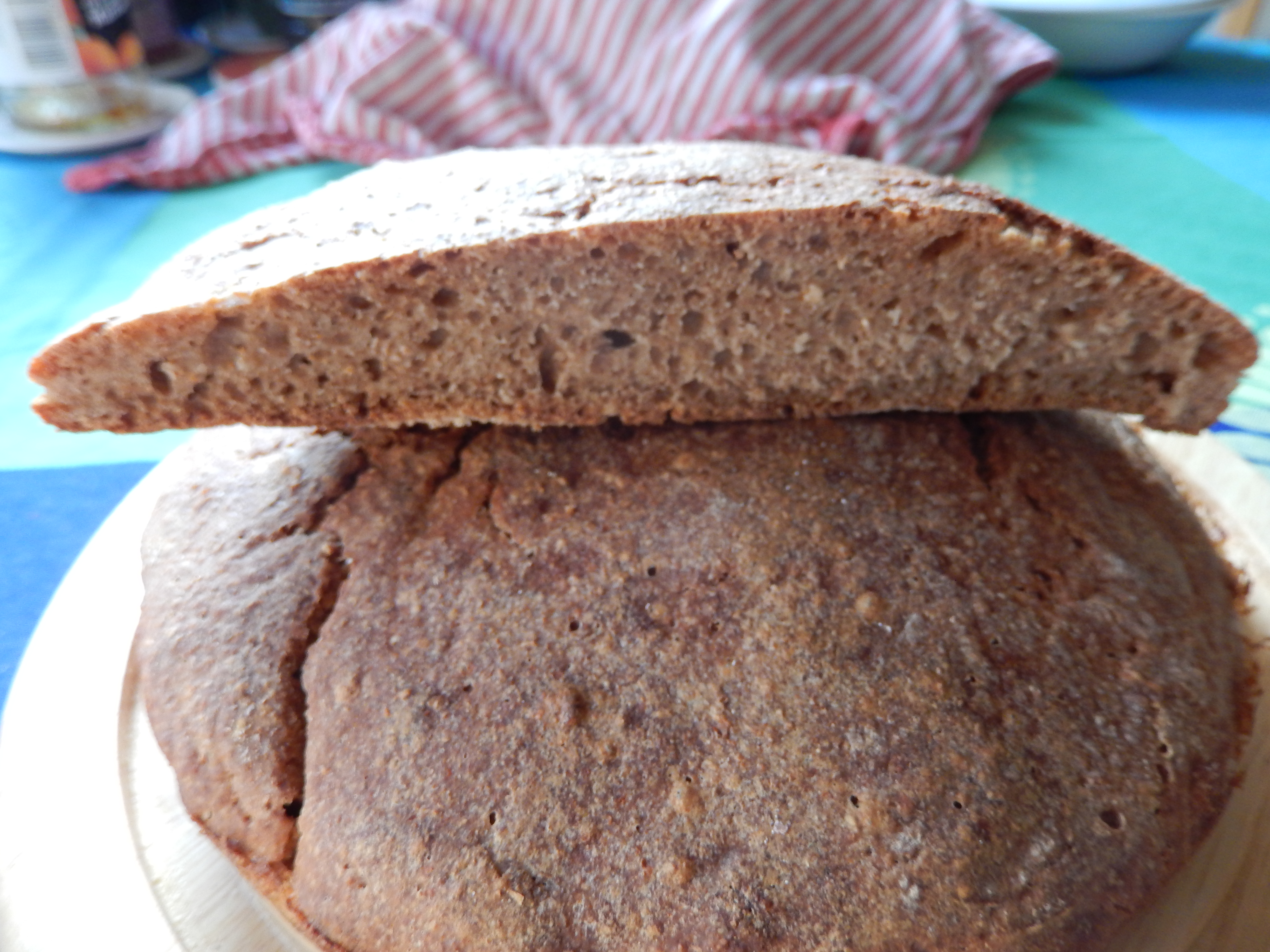 A few months ago I decided to learn how to make my own sourdough bread from scratch. I was sick and tired of breads I was being offered in supermarkets and bakeries with their additives, yeast and wheat. What I wanted was pure and simple sourdough bread with spelt or similar flour.

I did a bit of research in books that I already had. It seemed fairly straight forward: flour and water in equal parts mixed together in a covered glass jar or a porcelain bowl on your kitchen worktop. Than every day you add more of each until the sourdough soup (called leven by its technical name) starts to bubble and rise. According to all the books I had the leven would be ready to use in 7 days. Easy! Or so it seemed.

In my first attempt I used rye flour and filtered water as suggested by one recipe. I was so excited seeing the leven develop on days 1 and 2. Sadly, the leven got mouldy after only 4 days in the bowl.

My second attempt did not fare much better. I still used rye and filtered water. This time it lasted 5 days, and then started growing pink and smelling horribly. Another disaster.

For the next and third attempt I chose spelt flour and filtered water. Again the start was very promising, yet after 6 days this one turned into a yakky soup. By that time I decided that recipe book was no good, chucked it, and did some research in the internet. There I found a very down to earth recipe with a detailed pictorial idiot’s guide to making sourdough leven.

The fourth attempt did not go much better, again I used spelt with filtered water, but decided to use a glass jar – which previously had housed gherkins –  instead of a bowl. I figured, if it went yakky again I could just throw out the jar with its contents, saving me washing out the bowl. That also did not work. Yet again, the leven had not worked out – this time it was 6 days – although it did have the water separation from the flour as mentioned on the internet, at least that was something. Otherwise very disheartening.

I started to get rather frustrated, annoyed and upset. My confidence as a cook started to erode a bit too. And my pride as a capable and intelligent women – well that did not feel so good either.

How come that people in former times baked with sourdough all the time and managed to get at least one leven going? And here I was with four attempts that just ended in yakkiness. I could not get past the fact that generations of people before me had managed to do it – there must have been way. I just did not know what it was.

Fifth attempt: I had had enough. Because I had run out of filters for my Brita Filter, I decided to use bottled water this time. I found another old gherkin jar, added spelt and bottled water. Every day I waited for the yakkiness to appear – but it did not. The leven did exactly what it was meant to do every single day. By day seven I felt elated. Finally! I managed to do it. The leven was like a dream. Just as the internet recipe had described it. I felt elated.

The bread I made with it was also amazing – my friends loved it, I loved it.

And the best thing is, this leven just lives on. I have now made three sets of sourdough breads and the leven still keeps going, just as it is supposed to do.

Now I am sure you are wondering what does this all have to do with being an entrepreneur?

Entrepreneurs who have been in business for a while will have experienced times when things just did not go their way. What should have been straight forward and fairly easy, just did not work out.

Example of this are:

As entrepreneurs we cannot give up every time we are visited by some adversity. It happens, and sometimes it happens regularly for a period of time. If we gave up in the face of a little adversity or a knock back there would be no entrepreneurs left and we as a human race would still be stuck in the stone age.

As happened with me and sourdough, my emotions about the process and myself did briefly wander into the negative. I made the sourdough leven failure mean something about myself whereas in actual fact, it turned out, it was the water that was the problem. In my case, filtered water did not work! Once I had discovered that and rectified that, it worked like a treat and still does.

Even if as entrepreneurs we are responsible for the adversity, the failure or the lack of progress, we need to be able to feel the negative emotions, recognise them for what they are, let them go on their way and not make this mean anything about us.

2. Using ‘failure’ as an opportunity to improve

Not achieving something or failing, can be a downer. Instead of giving up entrepreneurs need to be open and ready to make changes to anything: the process, the ingredients (in business this could be the service elements or parts of the product), the recipe or location where to get it from (in business this could be the suppliers, our mentor or role models, the books we read) and our assumptions about ourselves, how things are supposed to work and the world around us.

Rather than being wedded and attached only to the end result, focus on each step along the journey more. I do acknowledge the end result is important – after all we all want to live and earn good money from our efforts as entrepreneurs.

When you start focusing and measuring each day, you start noticing the small nuances: the impacts and consequences of each action and non-action, how results are shaped and what leads to what. That way, you will be able to turn the ship earlier, before the yakkiness or failure can take hold.

4. Be prepared look elsewhere for inspiration

The book I initially followed had expert status. It did not work for me. As entrepreneurs we need to be prepared to find those experts or inspirational sources that work for us – in our marketplace, our way of thinking or our starting points. Even though, I am sure this book has helped an enormous amount of people, it was not right for my situation.

We also need to be prepared to step back from outside knowledge seeking and go deep inside to tap into our own ingenuity and wisdom. We all have it. Otherwise I might have never discovered that the water was the issue.

5. Believe in ourselves and our vision

Always come back to the abilities and strengths that you know you have. These are your foundation and platform you can always return to, and start out from again. A strong measure of self-belief sees us through the most difficult of times. Especially when after a number of fruitless attempts without any useful results – for me it was the fourth attempt – we are ready to give up not knowing that success is just another attempt away. I constantly marvel as Erickson’s 10 000 attempts to create a light bulb and his amazing self belief. If had given up at the 4th hurdle, we might still be using candles or gas lamps right now (who knows).

Take on the challenge: Turn around an under performing situation in 28 days

After my sourdough experience, I actually decided to apply these lessons to my business. There was an area which I was so not happy with. For 28 days, I applied the lessons. At times it was not easy, and the end I turned it around. Just like with my 5th attempt, it now works beautifully – it is replicable reliably and just works like clockwork.

If you have situation in your business that is failing or under performing, I challenge to you to give these 5 actions a go for 28 days. Notice what happens when you apply each of the 5 lessons every single day.

Let me know how you get on. I’d love to hear from you.

If you enjoyed reading this article, let know me your thoughts and experiences by posting a comment below.

Hey, and why not sign up for my Monthly Dose of Inspiration to live an amazing Life to be notified about the next article? Sign up here.